John took control of Witherspoon's Ferry (now Venters Landing at Johnsonville) after his older brother Robert Witherspoon died with no issue in 1787. Witherspoon's Ferry had already been in use during the Revolution, and this spot served as the backdrop for General Francis Marion's commission to lead the militia.

John and Robert were both sons of Gavin Witherspoon and Jane James, who came from Knockbracken, Ireland to Williamsburg. John was a patriot during the American Revolution, serving as a private with Marion's Brigade in the Britton's Neck Regiment for 244 days in 1780 and 1781.

In 1801 it was ordered that a Ferry should be re-established and vested in John's care. John married Mary Conn and had one child, Elizabeth, who later married David Rogerson Williams, Governor of South Carolina from 1814-1816.

John Witherspoon died in 1802, and according to the terms of his will, the ferry was re-established and vested in John D. Witherspoon, executor and friend, for a term of 14 years beginning in 1815, “in trust for and having the sole benefit of the incorporated Presbyterian Church at Aimwell on the Pee Dee River." John's will also stipulated that William J. Johnson be given rights to the Ferry site under condition:

It was John Witherspoon who vested the ferry lands in William Johnson, who later established the post office at Johnsonville which became the town we know today. 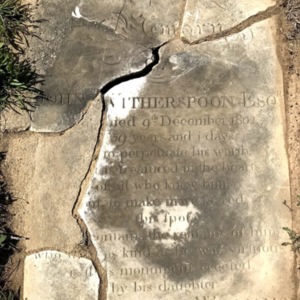