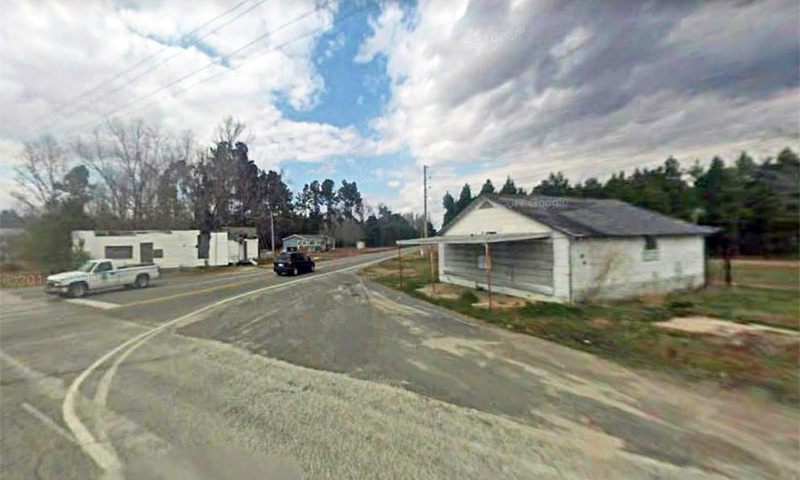 Vox Crossroads circa 2008. In 1963 the country store (right) was run by Byard Stone, next by Willie Stone, Bubba Driggers, and Ted and Norma Hanna. The store on the left was built by Arris Powell around 1949 and was run at one time by Furman "Dick" Powell, Willie Lee Powell, and later Son Brown and Coot Altman. 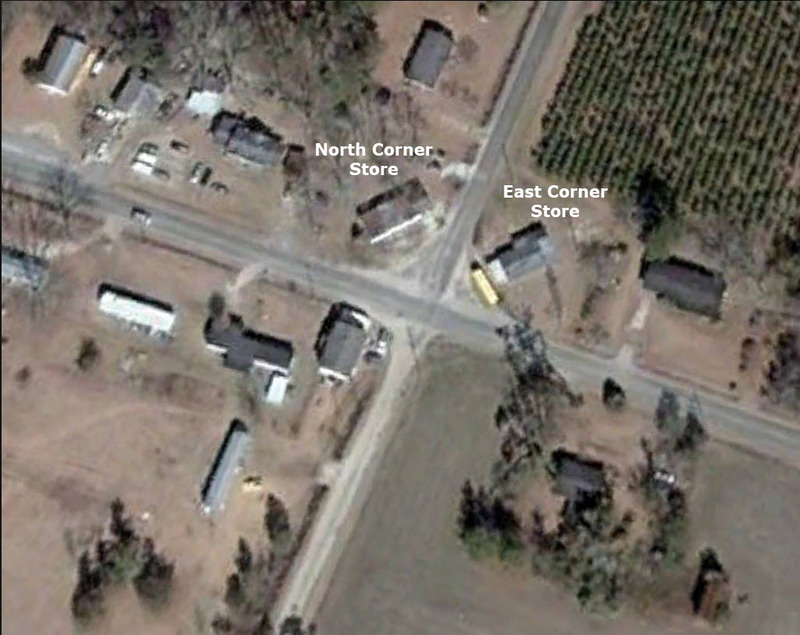 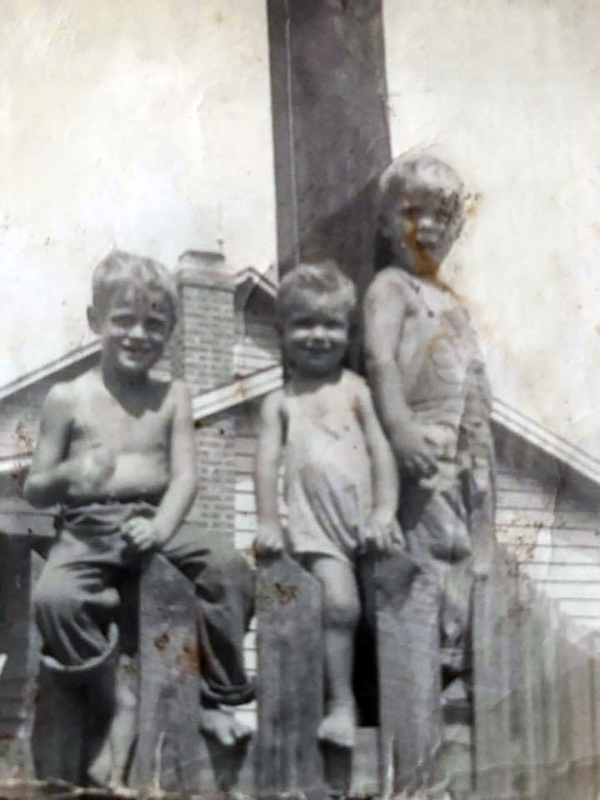 Mike, Ken, and Ronnie Powell at Vox Crossroads, circa 1949 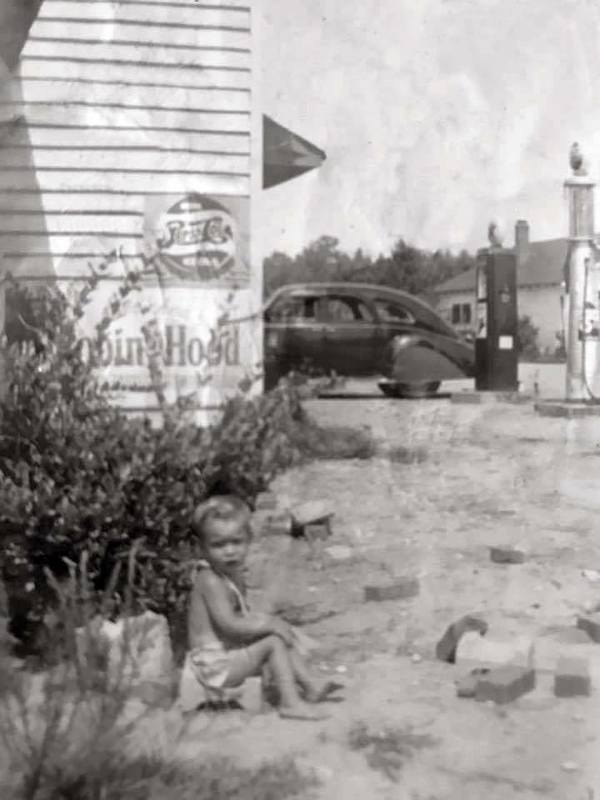 Ken Powell beside the store owned by Arris Powell at Vox Crossroads, circa 1949 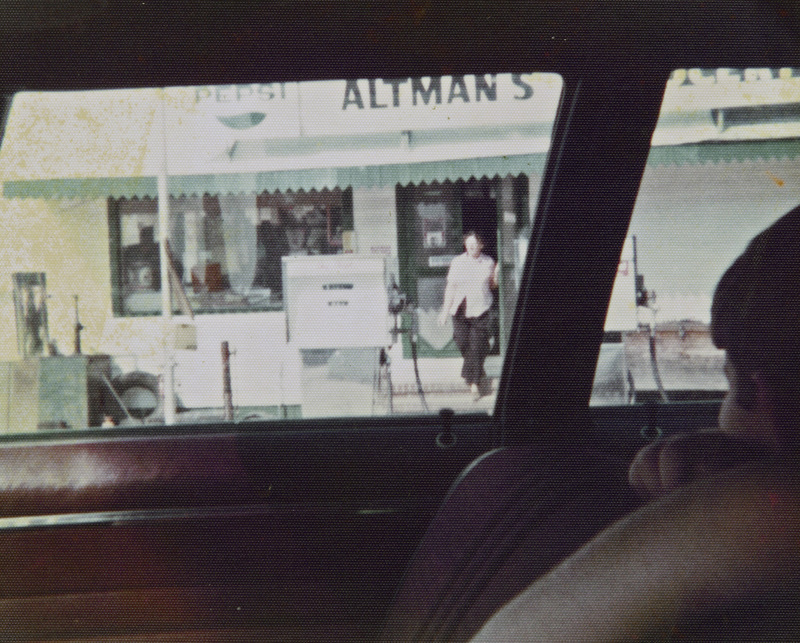 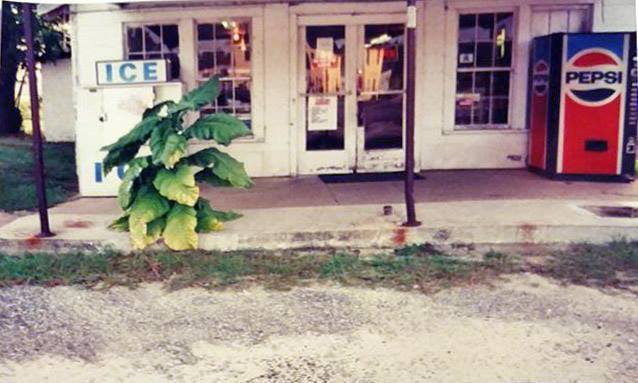 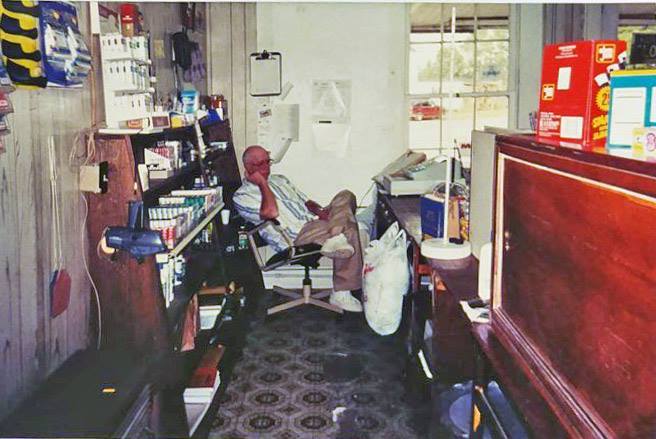 Vox Crossroads lies at the intersection of Vox Highway and Fire Station Road in the Vox community just west of Johnsonville.

Two country stores existed on the corners of the crossroads.  The store on the north corner was called Altman's Grocery near the end of its run. The store was built by Arris Powell circa 1949.  Over it's lifetime, the store was run by Furman "Dick" Powell, Willie Lee Powell, and later Son Brown and Coot Altman.  The store on the east corner was Vox Grocery when it closed around 2003. It was built by Norman and Miriam Stone.  Over the years, it was run by Miriam Stone, Byard Stone (1963), Willie Stone, Bubba Driggers, and Ted and Norma Hanna.  Bubba Driggers ran both stores at one point.

This crossroads was the center of activity in the Vox community for many years. Below are some memories from those who knew the crossroads well.

"I was born across the road in 1944 where My Daddy and Mommy Joseph Gregg And Mabel Eaddy raised 14 children. Uncle Willie Powell and his wife who was my daddy's sister was running the store when I was growing up. Mr. Arris and Mrs. Ann Powell and family lived there ran the store on the North corner. Then my sister Emmie Bell and Thomas "Son" Brown ran the store, then sold to Coot and Fannie Bell Altman who now still live in the big white house where I had a special bedroom up stairs. Then Bubba and Donnell Driggers owned it. When the store was being torn down I was given a lot of the old window for memories keepsake. I still live in the Eaddy home place across the road.  The store on (East corner) was run by Mr. Norman and Miriam Stone, Willie Stone, Byard Stone, Bubba and Donnell Diggers and then Ted and Norma Hanna. The Crossroad's was named after my grandfather and was known as Eaddy's Crossroads. Now some call it Vox Crossroads." - Mabeline "Bee" Eaddy Evans

"In 1949 I was about 1 year old. My Daddy (Arris Powell) owed the store on the north cornet. We lived behind the store until I was 5." - Ken Powell

"After he got his discharge from service which included WWII, Arris
Powell used his GI money to build a two story house which included a country Store under the upstairs part of the house. We moved to Johnsonville and Furman “Uncle Dick” ran the store. In the late fifties Arris Powell retook ownership of the store and had it moved to where Coot and Fannie Bell lives now. He then built the store you see in the picture. Willie “Papa” Powell ran the Store until his death in 1963. Son Brown bought the Store and ran it until Coot Altman and then Bubba Driggers ran it until it closed for good." - Mike Powell

"Around 1954 - 1958, the store on the north corner was run by Furman 'Dick' Powell. My mother Trudy was a child at the time. According to her, alot of the community met there at the crossroads on Saturday night where the adults talked and the children played." - Robert Humphries

"My treat when I was a kid was walking to the crossroads after garden and yard work to get an ice cold little Coke in a refundable bottle and a bag of penny candy. Mr. Son and, later, Mr. Coot always gave me a few extra pieces for my money! Mr. Bubba was also a really nice store owner. During his era my favorite purchase was a packaged ice cream that had a bubble gum ball in the bottom of the plastic cone container. Mr. Frank Eaddy was usually sitting in there in his overalls on a bench or a rocking chair visiting with the store owner at the time. I remember our buying gas from Mr. Willie when he ran the other store. It was a great community in which to grow up because everyone was like extended family. It was peaceful, safe and idyllic." - Mona Burris Dukes

"The building on the north corner caught on fire when Bubba and Donnell Driggers had it. Then they got the other store from Bobby Powell, and ran it.  I believe they were the last ones there.  Dick Powell, Daniel Altman, Frank Eaddy, Coot Altman, Frank Rhames, and Willie Stone were some of the last ones to sit around the store on the east corner, run by Bubba and Donnell Driggers. Mr. Daniel Altman wore overalls rolled up to his knees, and was barefoot.  You were always greeted by these men when you went inside. I stopped every time i went by, and I enjoyed going there.  Mr Son Brown helped Troy build my house in 1983 - he was a great carpenter." - Lorraine Hanna

"Carl Altman and his wife ran the store also, on the side next Coot's. Mr. C. H. Altman , Randy, and Timmy would help some of the time.  What I remember was the hook cheese in the wooden container, hoghead cheese, souce meat, and liver pudding. My daddy, Leo Wayne Hanna, bought the old chopping block that was in the store when the store closed for good.  We still own it today.  I don’t how old the that chopping block is but it was in the store for as long as I can remember and I’m 54." - Barry Hanna