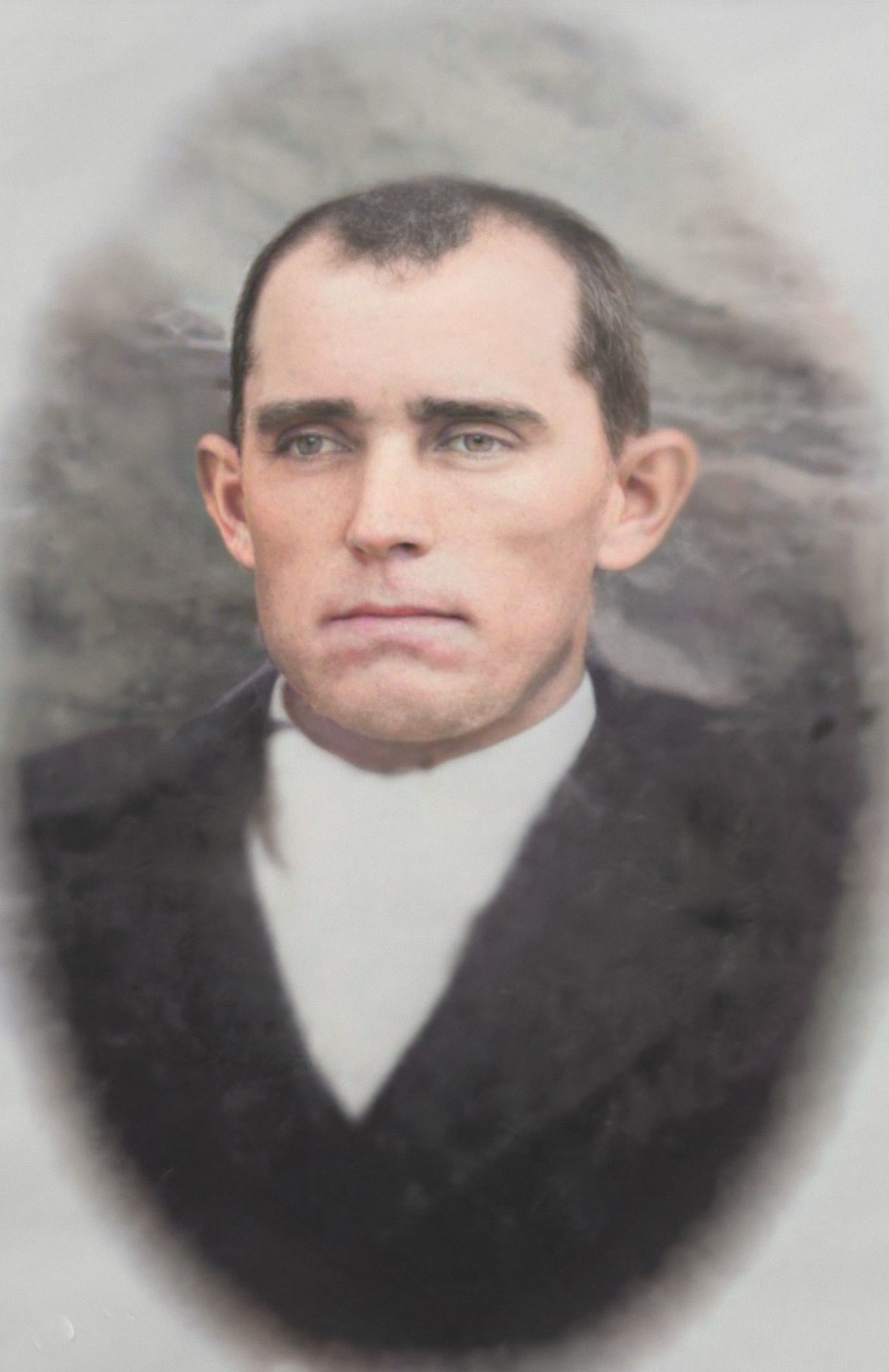 The following is an excerpt from his journal, written circa 1935:

A few brief scratches - My mother died when I was about 3 1/2 years old.  When mother died I fell into the hands of my grandparents.  G.S.B. Huggins, known as Old Uncle, some a preacher and known as one of the best Christians.  I stayed with him just a short while.  My father married my mother's sister and I still fell into good hands.  Most too young to realize the loss of a mother, my father took me back home.  But I had learned to love my grandparents, and of course he allowed me to go and be with him a lot.  And the things that happened for a few years from the time I was four to twelve was the time that things that happened was so indelible fitted on my mind.

As time when on we will take up transportation was ox and cart people mostly went to church.  By this way of traveling, sometimes mules and cart were used.  I can't remember exactly, but I think either about the time I was eight to twelve, I saw the first buggy.  I remember seeing the whole congregation gathered around that buggy.  I remember the question was asked what if the horse was to run away, that was answered quickly.  The harnesses were fixed with a back staff to pull that uncuffed the traces.  From then on it was who could get a buggy first.  They did not care so much how it looked.  Well for a few years, buggies and horses, who could get the best looking buggy and the fastest horse, was a race.

I think about the year 1891 is when we saw our first bicycle.  The folks hollered and cheesed like a big political speaking.  A few years passed, then folks was delighted over their way of getting 60 miles a day so fast.  A good day took, for the ox and cart, 18 to 20 miles per day.  A good day for the horse with a draft was 30 to 35 miles per day.  A very good trip was 45 to 55 miles by buggy.  These times went on for a few years.  I think it was about 1912 when I saw my first automobile.

I remember my first school day.  I think I were about 7 years old.  We had 3 months school and 9 months work.  If I remember right, for about 4 years we had the Blue Back Speller and read about the little boy up the apple tree and milking the cow and the pig and the peek and so on, just a few pages of reading in the back of the book.  The school house was a little log cabin and the fireplace was about 8 feet wide.  We made our living by farming and turpentine, and raising a few cattle, sheep, and hogs, just for our own use.  Times then begin to move up and gradually get better.  When I was about 15, I decided I wanted to leave home.  I got my father's advice and went away.  I soon found I had made a mistake and returned home.

I was married the 2nd day of July before I was 21 in December.  I was more inclined to the mechanical trade and followed the sawmill business, putting in mills, operating, mill weighting and so on.  My family began to increase so I soon found out that I would have to settle down.  My father cut me off a little home site.  I built me a little home and began to make me up a little farm.  I soon found that the pace was too small.  I bought me a larger farm and put in a sawmill planer and grist mill and opened up to the world.  I operated the mill and farm together.  My oldest boy volunteered and went to war.  Both boys were stitch wounded.  I was trying to send my children to school and I decided I had no help.  So I sold out mill and farm while prices were high.

I decided that I would go back to public work.  I didn't like this much, not having no home so I bought me a little home in the town of Johnsonville.  Also a place 4 miles out of town and worked me up a right good little farm.  My children all got married off.  My wife died August 5th 1935 and now I am alone.  I have eight children. Three girls and five boys.  I am 63 years old and I know I will be took care of and not worried so much about a home in this world but expecting a wonderful home in the world to come.